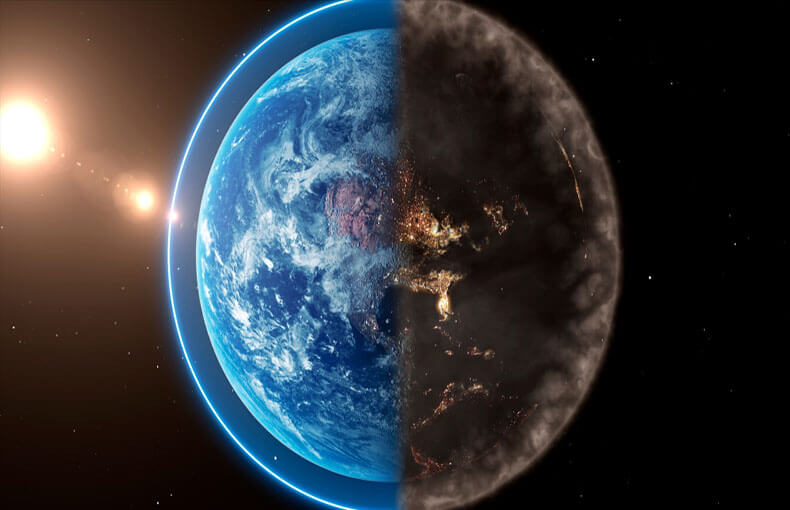 The innermost four planets in our own solar system (the terrestrial planets Mercury, Venus, Earth, and Mars) are rocky and made out of silicates. However, it has been proposed by the astronomer Marc Kuchner (University of Princeton, USA), that planets made mostly out of carbon compounds could exist. This theory has gained popularity and is said to be built on reasonable ideas.

Carbon planets may form in disks orbiting young stars where either there is a lack of oxygen, or there is an abundance of carbon. When old stars “die”, they spew out large quantities of carbon. It’s quite possible that there are many carbon planets orbiting stars close to the ancient galactic center, possibly even in globular clusters orbiting the Milky Way galaxy. As time passes and more and more generations of stars end their existence as stars, the carbon which was fused in the core will get more abundant. Thus, the concentration of carbon planets will increase. Maybe at a point, all planets formed will be carbon planets.

Until we know more about carbon planets, there will be many speculations. Some of the information presented below is based on a short e-mail conversation I had with Marc Kuchner in march 2005, and on the report released from the Aspen conference (link found below).

Their carbonaceous nature would make them different from silicate planets. The atmosphere might be smoggy, filled with carbon mono- or dioxide and other gases. If the temperatures are low enough (below 350 K), it is possible that gases could photochemically synthesize into long-chain hydrocarbons, which can rain down to the surface. These hydrocarbons range from compounds like methane (which can easily freeze, if the temperature is cold enough) to gasoline, crude oil, tar, or asphalt. The surface might be covered with tar-like precipitation. There might be a great lack of water on a carbon planet. The equivalences of the geological features present on Earth, such as mountains and rivers will likely be present on a carbon planet too, though with different compositions. The rivers could consist of oils for example and the mountains of diamonds and silicon carbides.

As long as the water is somehow supplied to these planets (from cometary impacts for example), carbon planets should be able to support life.

Below the crust where the pressure is high enough, it is very likely that a thick layer of diamonds exists. It is possible that during volcanic eruptions diamonds from the interior would come up to the surface, creating mountains of diamonds and silicon carbides.

At the center, carbon planets may have an iron core, or possibly a core of steel since the carbon may have reacted with the iron. The layer above the core will contain carbides (silicon and titanium carbides) that might be molten.

Presently there are no known carbon planets, though astronomers suspect that the three earth-sized planets found around the pulsar PSR 1257+12 may be carbon planets. They could have formed after the supernova explosion. There is also a possibility that the planets were gas giants prior to the supernova explosion and that they were stripped of their gas layers, leaving only the cores behind.

Some of the Neptune-sized planets could also be carbon planets. Carbon planets are believed to be frequent near the center of the galaxy since the concentration of carbon is higher there.

NASA is planning on launching a mission, called TPF – Terrestrial Planet Finder in the year 2015. This observatory which will be much larger than the Hubble Space Telescope will be able to detect such planets. The spectra of these planets would lack water, but show the presence of carbon monoxide, methane, and other carbonaceous substances.